V&P: A stop in Obamaland and then on to Louisville

So all of us Capitol Ministries folks are gathering here in Louisville, Kentucky, on the grounds of THE Southern Baptist Theological Seminary (they all say it that way here, with the stress on the article) for our annual Vision & Planning meeting, which starts tonight and will run through the weekend. The Sacramento crew except Lynne (who was smart and flew out yesterday) left this morning at 6:05, which was a lot of fun particularly after watching election returns flow in until the wee hours. 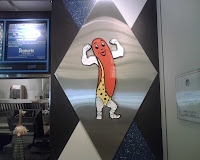 First stop was Chicago where we had a layover long enough to accommodate a quick bite to eat in the airport. David made small talk with a guy who, it turned out, was a native Chicagoan and recommended Superdawg, a hot dog place that's apparently famous in Chicago and has a franchise in the airport. We were all pretty hungry, so Superdawg it was.

The menu had a couple of things other than hot dogs, but what's the point of that? We all (Ralph included) got Superdawgs and fries and scarfed them down. Tasty. Messy. David and I got the exact same thing -- here's his, pre-devouring: 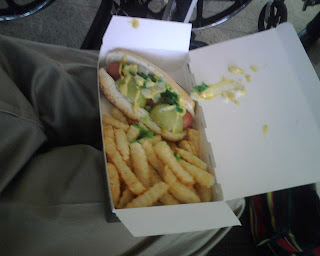 Then it was a short Southwest hop to Louisville -- 45 minutes in the air. We were shuttled to the seminary by a sweet student named Eric. A little time to settle in and then tonight and tomorrow morning, Dr. Steve Lawson preaches (and consequently sets our hair on fire). Then it's on to our formal meeting process.
at 1:53 PM

That really looks... gross. =) Glad you guys enjoyed it.

Wow...I hate to break it to you folks but you missed a real opportunity to enjoy great sandwiches from pot belly deli...for chicken lips and snouts. I won't elaborate on their warm cookies either....too bad.

Christina, it was sooo tasty! Didn't hurt that we were all starving by the time we ate.

Stacy, is there a Pot Belly in the airport? There was only a little time between flights so we couldn't leave O'Hare.