The list of things I was supposed to get at least started on tonight is pretty long.

Once my latest headache broke, I'd promised myself, I would Get Busy. The piles of unwashed laundry alone are borderline hoarder-y, never mind gross, and then there's the necessary wrangling of pet-fur dust bunnies, some of whose size rival that of the cat. I need to sort papers to do my taxes. Organize a drawer or two or 10. Find about six pairs of earrings that have gone missing. And so on -- you get the idea. The chaos is reaching epic proportions, and if it bothers me when my head hurts, it's definitely time to take matters in hand.

But, it turns out, when you have a nearly-16-year-old dog, your time is not your own. As I earnestly outlined my semi-ambitious To Do list, I caught Daisy out of the corner of my eye. Sitting next to me on the couch and just watching me. And, I think, waiting. For me and my attention, which had also been a bit absent prior to the headache breaking.

Putting aside pen and paper, I sat back on the couch and she climbed right into my lap, curled up into a ball, sighed maybe the most contented sigh I've ever heard, and was sound asleep inside 60 seconds.

This, it turns out, is all I need to do tonight. 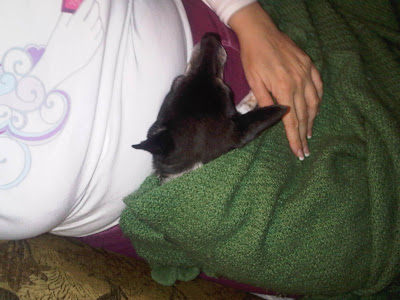 Labels: I wish you could hear her little snore because it's really pretty cute

I may have technically been born in New York City and lived my adult life in California, but I am a Southerner through and through. Raised by a mother from Georgia in suburban Houston, it's only been in adulthood that my accent has flattened out to where it's not immediately apparent where I'm from until I'm tired (or had a glass or two of wine...). The "y'all"s have stayed, though -- what can I say? it's a great plural. And I say other words strangely. The word "lever" is apparently not pronounced LEE-ver; the thing you use to keep the rain off you is not an UM-brella, but an um-BRELL-a; and so on.

It turns out, when I'm under duress, the colloquialisms also come back. Daisy had a pretty bad seizure very early this morning; she's been having small ones off and on, and given her advanced age -- and given the fact that she is basically a little Southern old lady herself, a case or two of the vapors every now and then is not unexpected. But this morning's was especially bad, and scared me. Scared me enough, as it turned out, to bring the Southern dialect back in full force.

I called the vet's answering service in a panic and was connected with a very kind and patient person who tried to get salient information from me about what was wrong with Daisy before she called the on-call vet for me. And I was telling her, over and over, what was wrong. She kept saying, "Beg your pardon?" "I don't understand," and "Can you say that again, please, ma'am?" And I thought (but thankfully did not say), "Are you learning impaired, lady? I mean, how plain do I need to be here?"

It was only when I stopped to draw breath that she said "I'm sorry, but what do you mean she's had a 'spell,' exactly?"

After much of the day at the vet, Daisy is home (she'll be heading back to spend the day there under observation while I go to work tomorrow), medicated on anti seizure medicine to the point that she is snoring with her tongue stuck out, and Boo is hovering protectively. 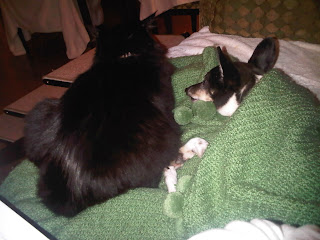 Labels: She wasn't the only one who had a spell today
Newer Posts Older Posts Home
Subscribe to: Posts (Atom)