I am safely in NYC with Eric. Yay!

The day is still unrolling over here (slowly... and with the assistance of a lot of coffee). We have theater tickets tonight, plans to eat at the Russian Tea Room as well as a new couch that will be delivered sometime this afternoon. But here are a couple of CrackBerryCam pics from my JetBlue adventures yesterday until today fully unwinds itself.

Here's a picture of the Pacific as we flew into Long Beach. Because when you fly to New York from Sacramento, an obvious midway point would be Long Beach. 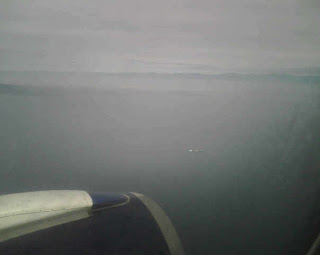 I spent three hours in the airport in Long Beach. Which appears to have been overrun with various forms of critters. For example, there was a flock of wrens that appeared to just live there all the time, flitting and hopping and flying around inside. Here's one wren that almost sat still long enough for me to get a picture. 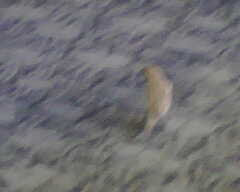 And, there were dogs. Lots of dogs. Specifically dogs on my flight. Dogs who, from the looks of things, have logged considerably more air miles than I have. For whatever reason, they were all miniature Pomeranians. Here's one of them chilling in the airport before being stuffed back into his carrier for the last leg: 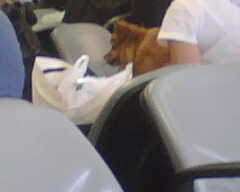 Last (and most fascinating) (/sarcasm), here's a picture of my lunch. Beggars can't be choosers when trapped in an airport. I was really glad the mayo was on the side in this case, because the little packet of it the guy at the counter handed me was warm to the touch. Ick. 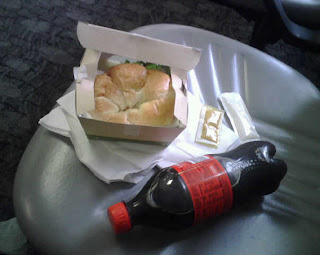