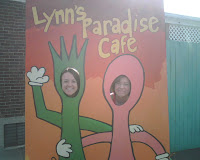 Lynne and I stuck around a few extra hours in Louisville on Monday before heading home, to make sure things were squared away and to have brunch with Jenny Solomon.

She arranged quite the Kentucky send off for us. First stop: a cemetery. Lynne and I were stumped as to why we were there (and had been told to bring our cameras) even as she was giving us hints while slowly driving along to our destination. In case we needed any more evidence that Jen may be the coolest person ever, we soon had it: she'd brought us to see Col. Sanders' grave site.

Which is something. He's buried in quite the fancy-pants cemetery anyway, with lots of sculpture and ostentation, but his is really set apart: 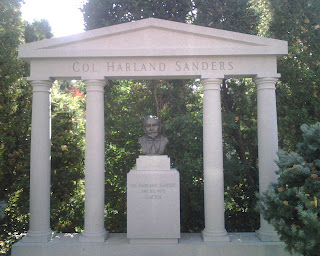 Even the actual grave marker itself was larger than life. He lived to be 90, which is something considering all the fried chicken he must have eaten: 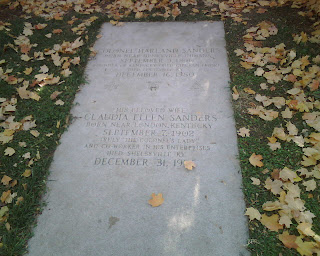 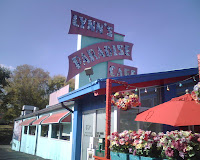 After paying our respects, we went on to brunch. Given that we three all share the name "Lynn" in form or fashion, it was a must-see place: Lynn's Paradise Cafe. The food was supposed to be great (Bobby Flay has been there for a couple of his "throw downs," and the cafe's food beat his both times), but it was also known for its decor.

I don't think Lynne and I had any idea what we had waiting for us. Lynn's sort of defies description -- it's quirky and kitschy and fabulous and strange all at once. Basically, if I lived in Louisville, I'd have to get a job there, because it was all I could do to tear myself away.

The decorating scheme, probably best described as "more is more," is so fabulous I can hardly stand it. I'm not sure the CrackBerryCam can capture it: 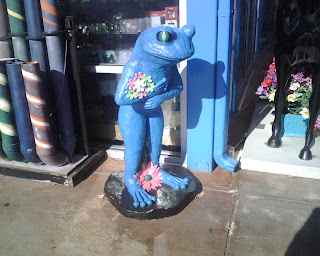 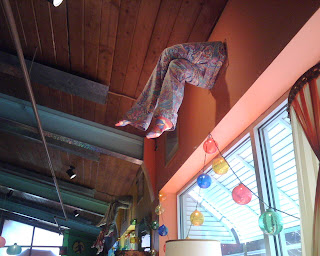 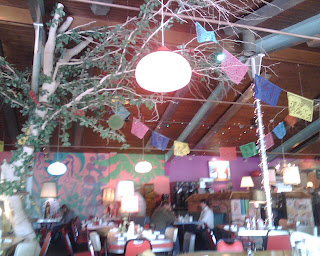 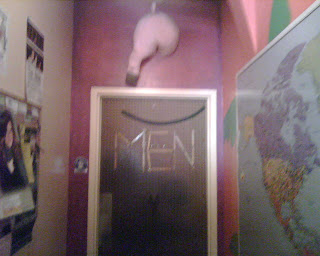 There was a gift shop, with all sorts of fun items to be had. 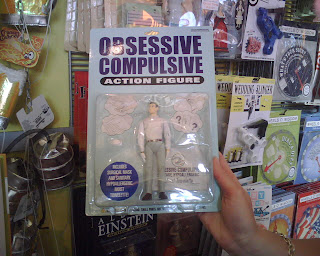 We all had to try on various hats (I didn't smile because I didn't want to interfere with my beard): 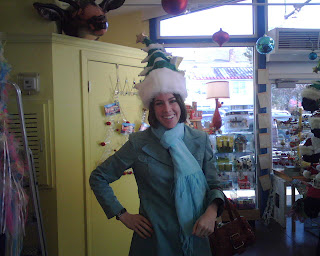 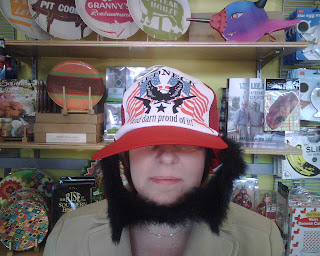 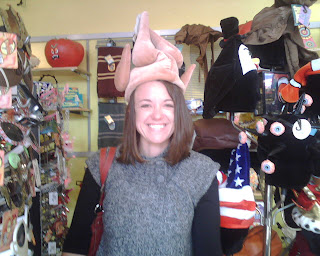 And then there was the food itself. We had a late breakfast, complete with biscuits and cheese grits (no shock those were mine). And bacon. Lots of bacon. It would be easy in a place with such larger-than-life shtick to have crummy food, to rely on the decor to carry the day. But the food was really tasty: 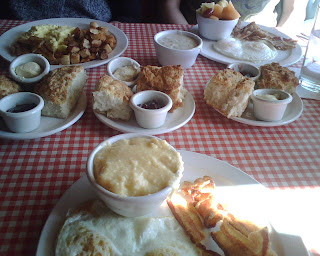 All in all, a wonderful Louisville send off. Jen is amazing and smart and funny and godly -- Curtis totally married up.
at 6:40 AM

Labels: I bought a What Would Bacon Do folder in the giftshop

My mom tells a funny story about waiting on col. Sanders as an AA stewardess -- back when they were called stewardesses (picture a beehive hairdo).

Mom asked if he wanted the chicken or steak entree. "Are you crazy, bring me the steak!" was the response.

I don't know how true the story is, but that's what I remember...

hmmm...What could bacon NOT do, really?? Looks like a fantastic send off!

Even in that hat your skin is incandescent.

It really was an eventful morning! :)