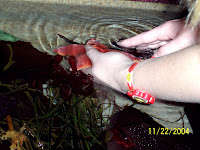 Yesterday was one of those days when I wanted to chuck my BlackBerry into the toilet. And then hold it under water to make sure it was truly dead. It was relentless, with its buzzing and chirping, as I ran from meeting to committee to briefing to my office to where ever the heck. Just when I would start to concentrate on something -- anything -- I'd hear the BlackBerry's familiar, cheerful little *chirp* and think, more or less, "&^$#%$#."

But I don't just use it for work -- my personal email goes to the BlackBerry, too. One small thing that helps on the crazy days is to occasionally get email I actually want :). Late yesterday, the BlackBerry made one of its quiet little chirps. Given the day I was in the middle of, my first thought was not terribly godly, but with a sigh, I scanned its screen. And almost burst into tears.

The email was from C, a young woman I love so much. We'd been in each other lives for more than four years -- and then, we just weren't. Between life changes and I'm not sure what else, we hadn't spoken in months, after at least weekly contact for years. I'd been mourning her, her absence, us, for so long, but didn't know how to get back to her.

And then, there she was -- just like herself, funny and open and kind. And I was pecking back to her as fast as my thumbs could manage on a tiny keyboard from the middle of a committee room, hoping that she could feel my love and joy despite the many typos and weird characters I punched in through tears. I wanted to hug the stranger I was sitting next to, I was so happy.

So much for drowning the BlackBerry.
at 6:35 AM

Labels: I get to see her Sunday and I don't know how I'll wait until then

I am so happy that you finally heard from C. I hope you have a joyous time catching up with her. :o)