A staffer on paternity leave two weeks earlier than expected + deadline week for fiscal bills + a bomb threat = this. 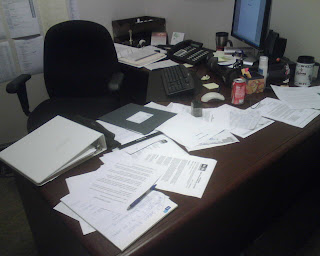 Yep, I said "bomb threat." The Capitol was evacuated yesterday while the Assembly was in session. From the Sacramento Bee:

Bomb experts from the California Highway Patrol detonated a mysterious package on the north side of the state Capitol shortly after noon Thursday, after the presence of two mysterious packages disrupted an Assembly floor session and caused the evacuation of about 100 people from the building.

CHP Officer Jarrod Lassila said no explosives were in the bag that was detonated. Offices on the north side of the Capitol were reopened about 12:30 p.m.

The detonation, which could be heard for several blocks surrounding the Capitol and filled the air with the smell of smoke, occurred after CHP officers used a robot to move one of the packages, a leather satchel with a piece of metal protruding from it, about 30 yards away from the L Street side of the building, to the base of a large redwood tree in Capitol Park. The satchel had been hanging from a statue about 20 feet from the entrance, according to CHP spokeswoman Jaime Coffee. A passer-by reported the packages to Capitol security shortly after 9 a.m.

Coffee said the other package had been determined to be just a plastic bag full of clothes. Tony Beard, chief sergeant at arms for the state Senate, said the plastic bag raised suspicions because it was found at the base of a monument to Gilbert Murray, a forester who was killed in 1995 by a bomb planted by Theodore Kaczynski, the notorious Unabomber.

Ron Pane, chief sergeant at arms for the Assembly, said offices on the north side of the building were evacuated as a precautionary measure. The Assembly chamber was also ordered closed. Pane said that in addition to the Assembly members, who were meeting at the time, about 100 people, mostly employees in the Department of Finance, were moved out.

"It's better to have folks move and be safe," Pane said.

The boss took us out to an early lunch, basically saving our lives by way of ceviche and burritos. We heard the bomb squad's detonation of the suspicious bag from the relative safety of Vallejo's. 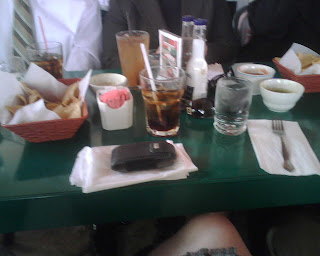 And then a propos of nothing, there's this. This sticker is plastered up over the floor numbers in one of the elevators in my parking garage. What does it mean? It's driving me crazy trying to figure it out. This is what comes of watching "Lost," I think -- a bumper sticker is never just a bumper sticker. Or whatever. 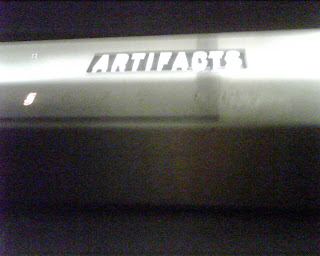 Labels: It'll be good to clear out and catch up and breathe today

I keep wondering about that sticker in the elevator too.

Vallejo's has ceviche?! That's the real news in this story! How did I not know that before?