It was just coffee 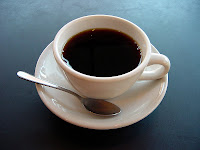 Lynne and I kept saying this all week: "It's just coffee."

Because I had a date last night. A blind date, specifically. The first date I've been on in more than five years. Even before I became a Christian I didn't date a whole a lot, but accepting Christ has certainly complicated matters in this area.

None of the three of y'all reading this will know the person, but I'll protect the innocent nonetheless by calling him C. He's the friend of a friend (who he's known for 28 years, so I wasn't terribly concerned about being ax murdered in the Starbucks parking lot). Divorced with two kids. We chatted briefly on the phone to make arrangements to meet and then I had to reschedule last week when I came down with the Dreaded Cold of Doom.

So. 5:30. The Starbucks on Broadway. I of course got lost even with my GPS and already being downtown (is it wrong that one of the reasons I yearn for my glorified body is so I'll finally have a sense of direction?). He was there waiting when I arrived -- tall, handsome, with a nice smile. He had obviously put effort into how he looked -- there were a couple of small red spots on his left cheek from trying to get a close shave. That was endearing.

We got drinks and found a table. I had a chai and the worst piece of banana bread I've ever eaten. He'd brought a paperback with him to read while he waited for me, and I was encouraged to see it was a Janet Evanovich novel -- I read her books, too, and thought it was a nice thing to have something in common. And it was.

But there wasn't much else. In the first place, he was probably about 20 years older than I am. His "two kids" are grown women with lives of their own in Los Angeles and Seattle. It occurred to me at some point while we were talking, "Oh my gosh. I'm the younger woman. I'm never the younger woman!" In the second place he didn't ask me a single question about myself until we'd been chatting for 45 minutes. I know about nerves and prattling on without realizing it (and I am certainly guilty of doing this myself), but yeah, that wasn't great.

Third and perhaps most importantly, he's a Christian but said he's not read the Bible in its entirety. Skinny Spice tells me she thinks this is common in Christendom and likely true for the majority of Christians, but it was a point of, shall we say, demarcation between us. When he said he'd just finished Ezekiel, for example, and that it had been really tough reading (which it is for sure), I said, "Well, but when you got to the Valley of Dry Bones, didn't that make it all worth it?" Because that's one of my favorite sections of Scripture and truly amazing stuff. And he just looked at me blankly. OK, then.

After an hour of talking and coffee drinking, he asked if I wanted to get dinner. But I begged off, saying I had other plans. Which I did -- to play WoW and watch stuff from my DVR. There's clearly no spark when Tivoed Grey's Anatomy holds more appeal than a shared meal.

So -- done. The streak broken. I managed not to choke on my beverage and keep up my end of the conversation. I think I looked OK and didn't commit any grave social faux pas. So, in some respects, a success. But I don't know that I have it in me to do the blind date thing again.
at 7:06 AM

Labels: Maybe in another five years

I'll I'm going to say is, while your discernment sounds good, in my experience, first impressions can often be incomplete :-)

Have you listened to Albert Mohler on the Valley of Dry Bones? One of my favorite sermons. If you would like to listen let me know.