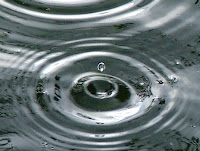 I grew up in a place that was wet and came of age in a place even wetter. I don't think I'd ever owned a bottle of lotion or moisturizer until I moved to Northern California, and the concept of going weeks, never mind months, without rain was unthinkable.

It was raining for every drivers' ed class I took in high school. Rained sometimes daily throughout the summer, often on just one of the street. Alaska actually smelled like rain, like ozone and greenness and just generally damp.

I'd heard of droughts before I moved here and I certainly knew about deserts. But I don't think I really understood there were places where even without drought or other extremity of climate, it just didn't rain at all except for a few months a year. It would have been unthinkable to me. How do you live apart from water? What about the plants and trees and yards? And just the general cycle of earth to sky and back again?

It rained so hard at times last night that it woke me up. It's been an exceptionally dry winter so far, and we're desperate for snow pack and rainfall total increases. And the long, grim summer looms, where our farms and yards will suffer without water.

It felt like a blessing, the rain. And being awake for it gave me time to think and pray. About living in a dry place. About a life so changed that rain in the night is cause for celebration.
at 6:56 AM

Labels: If only people could drive in it