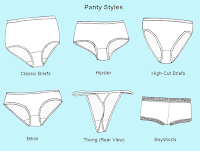 Given that it serves a basic function (to put a layer between us and our clothes), you'd think that by now there would be some sort of standard, commonly accepted form. But no. The varieties, fabrics, cuts, styles are seemingly endless.

And it feels like I've tried them all. Visible panty lines (VPLs) present one set of challenges -- when I was younger, your basic ladies cotton underwear worked fine, but once I got a bit older and started wearing suits and nicer clothes, they bunched up. I then moved on to French cut ones, thinking less fabric would help. Not so much, as it turned out. They left a whole different kind of VPL. Then, on to thongs, which dealt with the VPL but created a whole new set of problems by way of The Perpetual Wedgie. Trying to discreetly pull underwear out of one's bottom, it turns out, is not really ladylike.

Then there's the fabric. Cotton is bulky (and I've got enough junk back there not to need any more width), silk's not durable enough for daily wear, and modal is OK but oddly slippery and not in a good way. For the longest time, I had a drawer full of one kind of every panty imaginable. Because I'd buy one pair to try them out, and be disappointed. Then a different kind, then another, and so on.

Finally, I tried boyshorts. Cut similarly to men's boxers, with straight legs and waist, there's full coverage of, um, things without so much fabric that it can bunch. They're longer on the leg, so VPL isn't a factor. The straight waistband also leaves fewer lines and serves well under dress clothes and jeans both.

Here are the specific ones I'm currently loving -- Shimera boyshorts from Nordstrom: 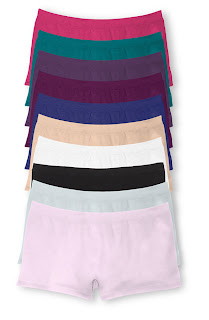 I got them on sale. They are nylon and spandex with some modal, making them comfortable and good for everyday wear (and washing). I tend to buy the nude color, because it's the most neutral and least likely to show through clothes (and it's not like anyone else is seeing them). Though -- they are flattering. I don't feel like I'm wearing granny panties, but there's sufficient coverage that everything stays where it's supposed to. Too, the lower-cut leg opening doesn't make a line across the widest part of my thigh, which doesn't hurt in terms of appearance. In this case, more fabric (if it's cut right) is definitely better than less.

I love these so much, I actually own more than one pair.
at 6:39 AM

Labels: Do not do an image search for 'panties' on Google I beg you

There is a whole series of tubes out there for you gentlemen to explore. Feel free to move on if you don't like the scenery here...

I love boyshorts, too. They seriously solve many problems.