'Lost' is finally back tonight. Yes!

It's basically the story of a group of plane-crash survivors interacting with a tropical island and its inhabitants. The longer story outlines the interconnectedness of all the plane's passengers, the role that the island dwellers (one in particular) may or may not have had in causing the plane to crash when and where it did, and what powers, if any, the island itself may hold.

I've watched faithfully since the pilot. Starting its fifth season, "Lost" is interesting, exciting and quirky. The plot is also somewhat complicated, so it's not really a show you can pick up in the middle. Netflix it from the beginning, if you're so inclined. I recommend this, because it's good.

Proof I have too much free time?

At the age of 43, I've apparently decided a wise use of my time would be to begin playing an online game.

World of Warcraft (which some female online friends refer to as The Widowmaker) is a role playing game set in a lush, incredibly complex electronic world. There are 11.5 million players worldwide so as your character works its way through various quests and tasks, there are tons of other "people" to talk to, fight with and band together with for common goals or against shared ills.

It's the free trial that got me. My character is a priest. Seemed appropriate. If you play (and care to admit it), email me. We can kill wolves together!

Obligatory picture of Daisy being adorable

She really loves this chenille woobie. 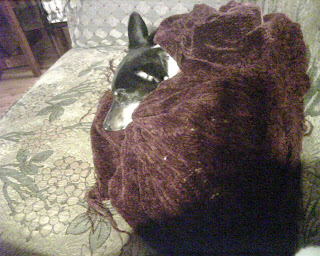 Labels: Tomorrow I will discuss underwear

When I first started writing, a MMORPG I was playing, Shadowbane, was slowly dying off and WoW was still in beta testing. It was a good time to kick the MMORPG habit. I avoided WoW, knowing how much time Shadowbane sucked from me. Now, since you're playing WoW, I'll pick up the trial. Every responsibility I have in my life thanks you.

For your readers (and soon-to-be-LOST-fans): ABC.com or Hulu.com have most of the episodes for free!