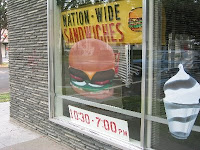 When you tell people you're in a burger club, or that you and some friends are trying to find the best burger in Sacramento, there is generally one of two responses -- either someone says, "Oooh! What do you think of [fill in burger place name here]?" or "You have got to try [burger place]. Best burger I've ever had."

In the days leading up to our trip to Nationwide Freezer Meats, I heard a lot of the second response. It's clearly a bit of a cult favorite here in town (though I'd never heard of it before we planned our lunch), and I was excited to see what all the hubbub was about.

We went Monday when the weather was warm and sunny. Which turned out to be a good thing, because it is a trek from the Capitol, y'all -- at 20th and H. We walked and walked and walked to get there (and since G and M2 drove, G didn't have to listen to me repeatedly whine, "Are we there yet? How much longer?" like he usually does). 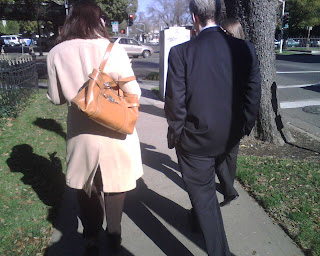 When we finally arrived, the decor was predictably kitschy, and rock music pumped out of the speakers. You've got to love a place with "Dirty White Boy" on its soundtrack. 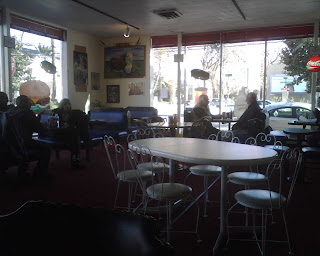 More kitsch: here, for example, is the salt shaker that was on the table: 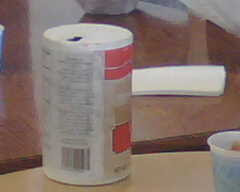 There's also a mural painted on one wall which must be famous somehow because it's featured in nearly all the web reviews of the place. We sat next to it: 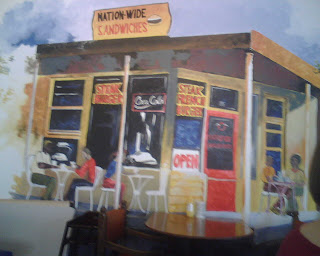 The menu was a little hard to figure out, burger wise. There were two basic kinds of burgers as far as I could tell -- a "small" burger and then a French burger. As A pointed out, there was no indicator of what made the French burger French, which was a bit disappointing. The bun, maybe? Dunno. About half of us ordered smalls and half French, I think all with a side of fries. J went nuts and, belying her teensy size, also ordered a peanut-butter-and-chocolate shake. More about that later. 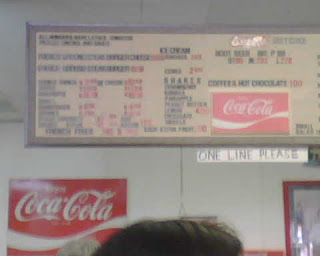 The food was delivered in brown paper bags. As an aside, when the waiter/delivery guy yelled out my name, I about came out of my chair, which amused him. 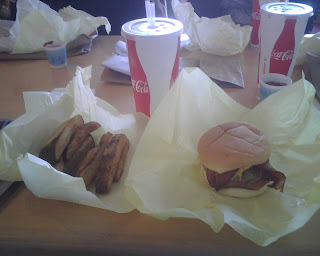 Here's my order. I had a small cheeseburger, fries and a Coke. It came to more than $11. Which seemed high for what it was. As someone pointed out, In'n'Out would be half that price for the same amount and general type of food.

There were a lot of us for this outing -- eight people, including several new members -- and as usual, the table got quiet as our food orders trickled in and we started to eat. But criticisms were quick to arise.

M thought the bun was fine, but other people who had the elusively-titled French burger thought theirs were soggy. I was happy that the meat was flavorful, particularly after the bland Lucca experience, but others thought it was overly salty. Then there was the special sauce -- some thought there was too much, others thought it was fine. The fries were a clear dividing line -- I'm not a steak fry person at all and was really unhappy with them. Others thought they were good, for steak fries, while G, who's the French Fry Guy in the group, said J's still has the best steak fries in Sac.

We ate and debated. And finally voted. Most of us gave passing grades, but none of us thought the food was particularly great, particularly for the price. J would have failed her burger altogether, but her rapturous love for the peanut-butter-and-chocolate shake saved the day. 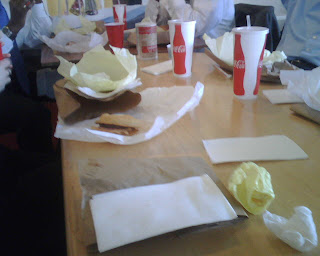 Labels: At least we got some exercise