I petsat for the Briggses over the weekend. They have three critters -- Harrison, who looks like a Bernese mountain dog to me but I have no idea what that is exactly; Mozart, a sweet black-and-white cat; and Jackson, a standard poodle who is a little crazy.

Look at Harrison's sweet face. All he wants to is play tug-of-war with his rope and sit at your feet. 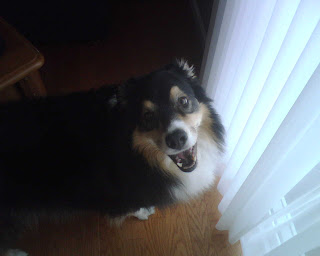 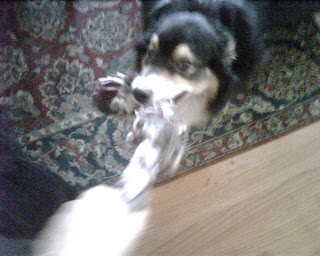 Then there's Mozart, who spent a lot of time peeking around corners to see if the dogs had him in their sights before coming out of hiding for food or attention: 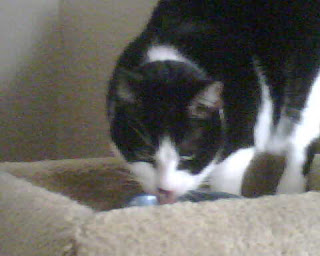 And, here's Jackson. He has challenges with sitting still, so most of my pictures of him are like this one (and like him) -- a little askew. 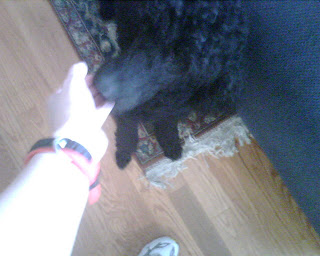 He has these crazy puffs of hair on top of his head and the end of his tail, like a Dr. Seuss character. The one on his head is a bit oddly shaped, like a bad toupee, and especially since he's always in motion, the whole effect is a bit cattywompus.

He did stand still long enough to drink some water before streaking off to harass Harrison or the cat. I can't remember. 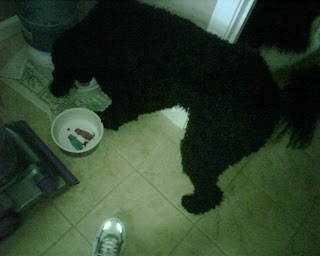 When the dogs play, they wrestle like bears: standing on their rear legs, front paws grabbing at each other, a great deal of poseur growling and snarling going on. It's hilarious. Here they are circling each other before a bout: 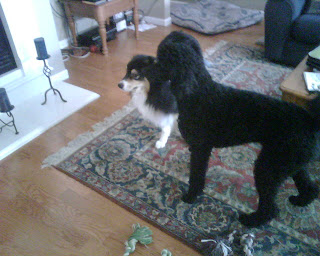 I have to say, after eight years of having a small lady dog who weighs 11 pounds, it was really something to wrassle and herd a pair of young, healthy male dogs. Every time I came home from visiting them, Daisy would sniff the exposed bits of my skin, trying to get her fill of them.

Speaking of Daisy, here she is with Armando from his visit last night. She was all over him the whole time he was here. 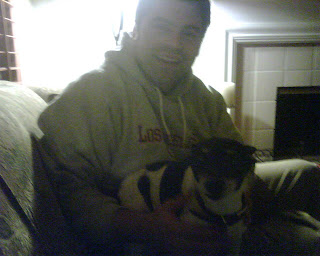 Labels: We made pudding

=) Looks like fun stuff. Harrison is an Australian Shepherd. ;)

Mrs. Clampitt is such an incorrigible flirt!