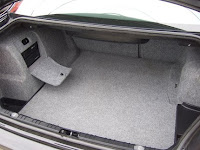 I've been going to the gym for a couple of months now, and I'm stuck. It was bound to happen. I tend to thrive once I can get into a new routine, but being basically lazy, I also flounder without clear goals. Throwing my Type A tendencies into the mix, once I set upon something, though, I tackle it pretty hard.

I took a good, hard look at my physical self Friday. I didn't much like what I saw, despite two months of mostly-aimless-though-consistent gym going. And decided that I needed to focus, get a goal and hit it. Operation Junkless Trunk* was born.

So! Yesterday, full of resolve, I grimly marched into the gym, iPod and Sigg bottle at the ready, to engage in my own personal death march. I hate cardio so much, but there's just no more efficient means of losing body fat, never mind increasing stamina and overall fitness. All of which are admirable goals, but frankly it was the, um, rear view that was focusing me like a laser.

And, within minutes of serious running on the treadmill, I was limping and in tears. A few years ago when I previously decided to start running in earnest, I gave myself wicked shin splints in both legs. And, being both stubborn and stupid, I kept running. To the point that I gave myself a stress fracture in my left shin. And yesterday, after less than four minutes of running flat out, the all-too-familiar ripping pull in my lower leg was back.

A trainer saw me hobbling and came over to help me. Brought me ice and sat down to talk to me for a bit. And it became clear pretty quickly that I was going about things completely wrong (shocking). He talked me through the difference between training and rehabbing: what I wanted to do was train (run fairly aggressively and consistently for increased fitness), but I needed to rehab first (slowly and deliberately increase my exercise back to pre-injury levels through a monitored program of staged increases in duration and intensity). Since my body hadn't ever properly rehabbed from the prior injury, despite all the time that had passed, I was setting myself up to re-injure unless I went about running the right way. He said I could definitely get where I wanted to go, but that it would take longer and require strategic, steady effort.

We worked out a 12-week, three-days-a-week treadmill routine. I'm to lift and/or stretch the other days. The maniac in me is screaming at the thought that all I can do today at the gym is walk for 10 minutes on the treadmill, and that it will be nearly all walking with short bursts of running for about seven weeks. But if this works, I'll be running 30 minutes at a stretch, safely, in about three months' time.

*Maybe Operation More Trunk, Less Junk would be a better name.
at 3:54 AM

Labels: I will also no longer be eating crappy food