In which Sean scares me about half to death 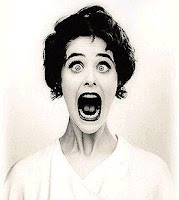 There have been a lot of "firsts" for me since I joined Capitol Ministries in June. Like the time that a bunch of donation checks were delivered to the office sopping wet and I had to figure out how to dry them out so I could deposit them. Or last week, talking with a sweet old Dutch dairyman who called the office looking for Sarah Palin's address because he was going to send her a letter to let her know that CM wanted her to be president.

For those of you who haven't been to CM headquarters, we have a small office space in the basement of the Senator Hotel across the street from the Capitol. Lynne and I share the main space you enter when you first walk in; Sean has his own office immediately to the left. The door that leads out to the rest of the basement is directly in front of my desk, and it's that door that is most commonly used. And it's used a lot -- as people wander in and out, make bathroom runs, head to the bank or the mailboxes.

I've learned since I've been there to sort of not be terribly conscious of staff's comings and goings. For one, I don't want to dwell on people's potty habits (and let's be honest -- that's where people are mostly going), and for another, there are times that I need to concentrate on whatever task I'm doing, and keeping mental track of everyone's whereabouts isn't bandwidth I have to spare.

I had a busy day yesterday, to the point that I stayed back from the noon Bible study to keep working. I was trying to get through a deposit, juggle phone calls and keep up with my email. Not an unusually busy day, necessarily, but definitely plenty to hold my attention. Lynne had already left to head across the street and, in the midst of my little flurry, at one point I was vaguely aware that Sean had stepped out. A couple of minutes later, again, a vague sense that he'd returned sort of registered. But I kept my head down on my desk and email.

Then. I became aware of a presence near me. Coupled with the slightest of movements, enough to raise my eyes and attention from my work. And as I looked up, this is what I saw: 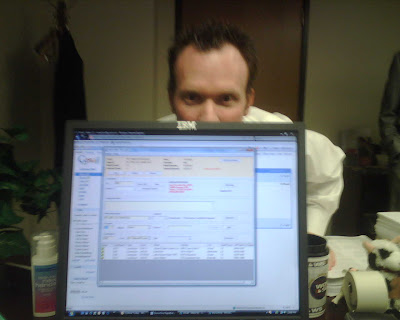 I shrieked! Obviously. And I think I half-scared Sean back when I did. He asked me, "Did I scare you?" (Answer: No, your hiding from me and then peering over my computer like a stalky maniac didn't scare me at all. I just shrieked like that because I have Tourette syndrome) Finally, I started to laugh. And laugh and laugh. Out of relief and just the general funniness of the situation. I had tears in my eyes and couldn't catch my breath and turned bright red (apparently). Sean was laughing pretty hard, too, and even poor David heard all the commotion and wondered what was going on.

Maybe you had to be there, but it was pretty funny. And good to know Sean's covert ops/Marine training hasn't gone to waste.
at 3:35 AM

Labels: Those of you waiting with bated breath for my promised underwear post will just have to hang on until tomorrow

if you end up with a heart condition I'm sure you've got some legal recourse.

your life is always so exciting, nora...and I love the way you are ready to capture it at any given moment for us to enjoy. thanks.