In which my Sunday is deemed a complete fail by 2:30 in the afternoon 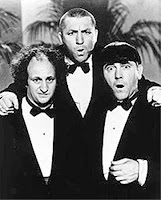 The days I get headaches, I've decided, are nearly always more trouble than they're worth. I mean, I start out with the best of intentions, but nearly inevitably the wheels come off the wagon pretty early on and I wind up stumbling, Stooge-like, through a series of misadventures.

Take today, for example. For two days off and on I've been trying to fight off a headache, and when I went to bed last night, since it hadn't taken hold yet, I thought I'd beaten it. But when I woke up hurting this morning, the battle was over. Oh well.

It took me twice as long as normal to get ready, largely because having water splash against my head and a blow dryer roar into my ear were not really working out terribly well, despite drugs and caffeine and other tricks of the trade. By the time I was dressed and put together, though, I was determined to go to church. Determined. 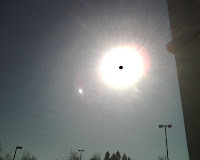 Where, after arriving late, I lasted all of 10 or so minutes before it became clear I was too ill to be there and, if I wanted to be able to get myself home, I needed to leave. So I drove home, squinting into the bright sunshine that ordinarily would be welcome on a January winter's day.

Once home again, I turned on the oven. Baking wasn't really what I wanted to do, urpy and disoriented from the migraine, but I have all this Amish friendship bread starter that needed to be baked into bread today or else it would no longer be good. Friendship bread is the product of nine days of preparation, beginning with the starter, which is a yeasty goo that, when mixed with flour, sugar and eggs, yields a lightly sweet, fluffy, cake-like bread. For nine days, I'd been tending the starter to arrive at today's baking -- mushing the goo in its airtight Ziploc bag, adding additional flour and milk at the proper stages, burping the Ziploc of the excess carbon dioxide emitted by the thriving yeast.

Under the influence of the headache, though, I'd make a critical mistake. Last night, I measured out a cup of the starter and poured it into its own Ziploc to take to church with me today for a friend who wanted to undertake the odyssey. Well, I didn't completely seal my bag when I was done. And air got in. Which is one of the few no-nos for friendship bread starter. In addition, the Ziploc had sort of fallen over on its side and a puddle of the starter goo oozed out onto the counter from the unsealed top -- which I, of course, didn't notice before I left for church. So, nine days of starter coddling went down the drain and I got to spend about 10 minutes literally chipping congealed yeast off my counter.

I won't go into the trip to the pharmacy to pick up more medicine -- where I went to the wrong pharmacy, stood in line and finally had the pharmacist tell me I was in the wrong place -- or the load of clothes I washed where I used bleach instead of fabric softener and forgot soap altogether.

So, yeah. I'm done for the day. Officially. When I can't successfully seal a Ziploc bag or wash a load of underwear, I need to just admit defeat. I'm off to watch "Goldfinger" and try not to hurt myself on the couch.
at 2:33 PM

Oh my gosh. the clothes part seriously breaks my heart. Please tell me it was like, old underwear or something.

if you had to bleach something... that's probably what you would pick? Sorry you hurt.

oh dear...shows you what kind of undees we have around this house. Sorry for the man-blunder in the above comment.

What did the amish do before ziplocs?