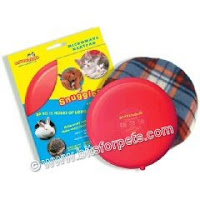 And if you're an almost-14-year-old dog with short hair and who weighs 11 pounds, you feel it. The house has wood floors throughout the downstairs, and while I can throw on my Ugg slippers and some sweats, neither is really an option for Daisy. When I was home more between Christmas and New Year's Day, I noticed her shivering at times, even while curled up in a ball on the (seemingly warm) couch. It was time to do something.

I read on the Interwebs about the SnuggleSafe, a microwavable pod that you can put in your pet's bedding. After being microwaved, it maintains a nearly constant 123 degrees for about 12 hours, and since there's no electricity or cords involved, it's safe for use without being monitored by a human.

And here it is. A solid Frisbee looking thing filled, apparently, with some sort of space-age gel inside. 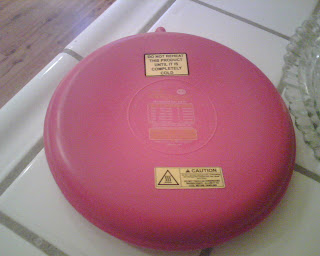 And here it is in its Polarfleece cover. The surface of the thingy gets pretty warm, so the cover enables it to be moved and touched. 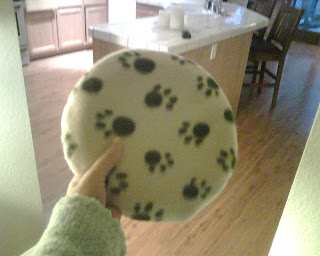 Five minutes in the microwave in the morning... 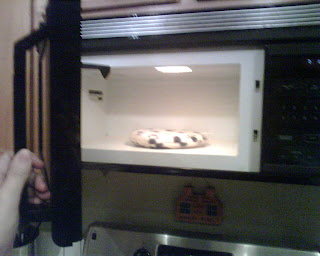 ... and then it gets tucked into Daisy's dog bed under the "covers," where it gently radiates warmth throughout the day. 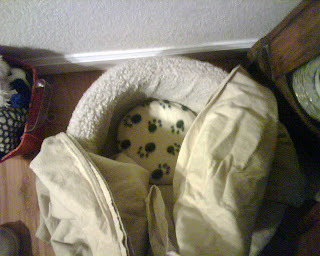 I was worried that Daisy wouldn't take to it, or wouldn't want some weird thing in her bed with her. But I needn't have been concerned. 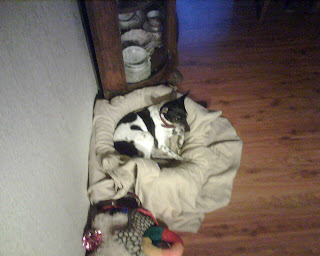 Labels: I was less than $25 on Amazon

Do they make them bigger? Woody would love this!

Nora, this looks fabulous! I think it's just the thing I need to persuade my cat to sleep elsewhere than the dining table.

Sharon, I don't know if there are bigger sizes. But even being small-ish, it puts out a fair amount of warmth and I think would, like if placed under a blanket, even provide a good warmer for a big dog. And 'Thia, cats apparently love this thing.

Nora, 'tis true! Plus Four is now a total slave to his warm spot on the couch. I cannot thank you enough for this recommendation!