Going off my meds. Again. 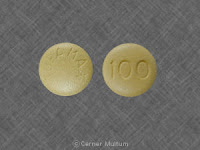 It's no secret to anyone who knows me that I have chronic migraines. I've also been taking "preventative" medications for them for years now.

It started with daily doses of anti-inflammatories and went from there to hormonal therapies and beta blockers to adding a low dose of a old school antidepressant to the mix (not for its antidepressant properties but for what it did to the chemical mix in my brain). These drugs kept getting increased in dose over the years until they lost their efficacy.

Which wasn't great. I was in daily, significant pain punctuated by regular migraines. I had gained a bunch of weight from the medication combination and its impact on my metabolism (a common side effect). Nothing was working.

So two years ago with great trepidation I started an anticonvulsant medication called Topamax for preventative treatment. For many migraine sufferers it's the silver bullet, but it brings its own challenges and side effects. And since it's a drug that works directly on the brain, basically, it's not messing around. It's not a drug to take lightly.

And -- here I am again. After a brief respite when I started with Capitol Ministries, I am again in pain every day. I'm at a daily dose of Topamax that exceeds what most migraine sufferers take, and it's just not working. Except to provide many lovely side effects (I know why it's called "dopamax") -- memory problems, name- and word-finding challenges, pins and needles in my hands and feet, fatigue, changes in the way things taste... If the headaches were gone, it'd be one thing. But to be feeling this way and still be in pain, and given how expensive it is, it's just not worth it.

This is a very long way of saying that I am going to go off the medication. It could be that I'm wrong about this and the medicine is all that stands between me and migraines the likes of which I've never seen before. But my guess is that the Topamax quit working, just like the other medicines, and I've basically just been enjoying the side effects here for a while.
at 6:03 AM

Labels: I have no idea what the next step will be