I am down with a really persistent headache today, so here are a few observations from my little suburb.

Someone is moving out of The Crying Swearing Neighbor Lady's house. There's a moving truck parked in the street and her Barky Dog is in the back yard, quite upset by the whole thing if his yowling is any measure. Her boyfriend's car (because she has a boyfriend) is parked in front of my house, full of stuff. Daisy is pacing around, too, concerned both about the moving van (which she keeps looking at through the window) as well as the barking. There's a lot happening here.

The folks who live on the other side, The Smoking Neighbors, have had a young woman living with them since late spring/early summer. She, too, smokes, so I see her a lot on their front porch with a young guy who seems to always wear a hat that looks like this, except navy blue. It makes me wonder if he's not overly warm given our temperatures lately:

The only thing I knew about her was that she was a recovering heroin addict. She'd revealed this to the guy who painted my house recently after he teased her about being out on the porch smoking all the time. She said, given the heroin situation, smoking was the least of her problems.

Last night as I was bringing in my garbage cans (oh, the glamour of my Friday nights), I had a chance to talk with her myself for the first time. She's apparently not from around this area, because she asked about the heat and why it was still so hot at 8 p.m. I explained that's how Sacramento summers went -- you could basically project the next day's temperatures by how warm the evening before had been. After we talked, it occurred to me how friendly she was, how neighborly. I can't remember a similar interaction or conversation with the Smoking Neighbors in the whole time I've lived here.

In other news, the last two Thursdays when I've come home from work, there's been a tree branch lying across my driveway. Two weeks in a row on the same day. And these are substantial branches, heavy with green leaves and little berry things. I have to drag them out of the way. There are a few weird things about this -- first, I don't think they've fallen off either of the trees in my front yard, which is adjacent to the driveway. So where are they coming from? How'd they get here? Second, they aren't dead branches, so I'm not sure why they're just dropping off of whatever tree they came from, especially since we haven't exactly been having wind or rain storms lately. I await next Thursday with great interest.

Last, apropos of nothing, here is a LOLCats that's a. not a cat and b. pretty cute: 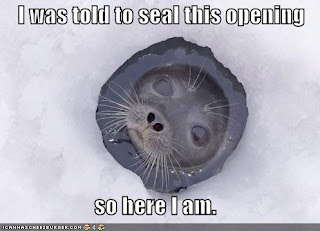 Labels: It would be good if the barking stopped for a bit