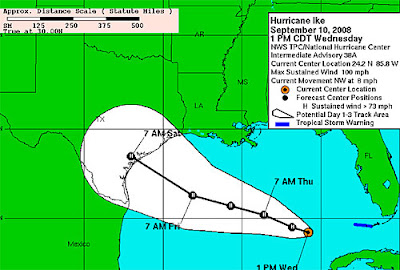 Significant parts of the coast generally and Houston specifically have been evacuated, but many people who either weren't under a mandatory order to evacuate or didn't have the means to leave are riding out the storm. As soon as I heard about the mandatory evacuation, I emailed my friend Joe, who lives there and is among those sticking it out. He emailed me back tonight (finally!) to let me know he was fine, so far, watching the news coverage and having a glass of wine.

He's doing better than I am.

I still remember Alicia, the deadly hurricane that tore Houston apart in August of 1983 and killed 21 people in the process. I'd just graduated from high school and, the night Alicia hit, I was supposed to go see Stevie Ray Vaughan playing with David Bowie in concert. That didn't happen. Instead, the city was plunged into days without electricity, potable running water and, perhaps worst of all in the late summer heat and humidity, no air conditioning. My mother's house had more than a foot of standing water in it after the storm, and we battled mold, bugs, the temperature and each other as the days without modern conveniences turned into weeks. It was horrible.

I have admittedly mixed feelings about Houston -- on the one hand, it's definitely a good place to be from, if you know what I mean. And I don't miss much about it except a few people. And baseball season. But it will be always be home to me in some elemental way, and knowing what's coming to that funny, strange city I grew up in -- having lived through something similar 25 years ago -- all I can do is pray for them. 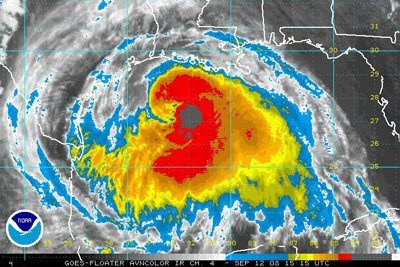 Labels: I hope you'll join me

We're headed there for a wedding next weekend. I'll report back on the state of our beloved Houston.