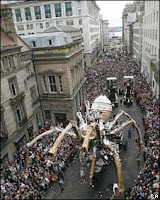 Crowds packed the streets to follow the mechanical beast on its walkabout from the Cunard building through the city.

And although the rain eased for part of the day, onlookers were still soaked by huge jets of water from her abdomen.

The £1.5m Capital of Culture event, operated by French company La Machine, was continuing on Sunday.

La Machine's 37-tonne beast has generated headlines around the world, and culture bosses say they have been delighted with her impact.

Mike Doran, of the Liverpool Culture Company, said: "I've never seen the city centre look so busy. It is reminiscent of when Liverpool brought the European Cup back."

There was some disappointment earlier on Saturday when crowds turned up outside the Cunard building expecting a show which never materialised.

Nicky Webb, a director of Artichoke - the company producing the show - blamed the mix-up on cultural differences and said the French artists never intended to stick to a schedule.

She said: "For them the story is a piece of magic. They want the spontaneity of things not running according to our British clockwork... it doesn't work like that with a show like this."

La Princesse was unveiled to the public on Wednesday morning, hanging from a redundant office block next to Lime Street railway station.

She was woken in a hail of fireworks and smoke at 1130 BST on Friday, before striding up and down in front of the arena in front of a cheering crowd.

Later on Friday night she took a dip in the Mersey in front of an estimated 20,000 people.

The spider is made out of steel and poplar wood and is operated by up to 12 people strapped to her frame.

In May 2006, the company's Sultan's Elephant drew an estimated one million people to the streets of London.

And, here's a short video showing the spider on the loose!

Labels: It's art y'all