So last night's convening of the Women's Caucus was its usual hilarious self. I am not sure what it is about gathering a bunch of Christian women together on a Friday night for dinner and laughter that brings out the random in Sacramento, but hey, we're always down for a good time.

Seven of us (counting Baby Sammy) hit the Buckhorn Grill, at 18th and L, and commandeered a couple of tables outside. I think four of us ordered the Bacon Cheddar Buck -- tri-tip, bacon and cheddar cheese on a soft white bread thing. Behold the glory: 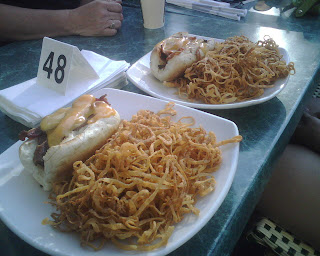 There was a salad ordered by one of the more dietarily responsible of us, and even a Little Buck (kid's meal) -- which looked tasty, too: 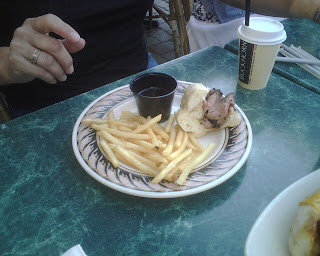 Interspersed with the food was screaming laughter, a cranky panhandler with a story of woe whose logic was pretty obviously flawed, and several quite drunk young men who told us the name "Mallory" means "unlucky" (?) but wanted to know if we'd still name our daughters that (um, no), wanted fist bumps (um, no) and I think also, potentially, dates. Their ardor was undeterred by the presence of a three-month-old baby, a woman who plainly said one of the young women at the table was her daughter, and the fact that none of us appeared the slightest bit interested.

After several hours of this craziness, we set back off into the night, returning to our homes and real lives. It was likely our last get together with Lindsay, who selfishly leaves us all to go to college next week.

I just treasure these nights with them so much. What a blessing. What a hoot.
at 9:42 AM