In which I proclaim my love for precooked bacon 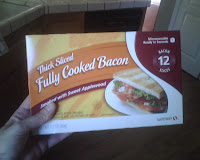 Anyone who knows me for more than about 15 minutes knows I love bacon. Perhaps to an unhealthy degree. To date I have had two birthday celebrations where bacon was a featured ingredient, I put bacon in my grilled cheese sandwiches (which I also make with Velveeta slices) (don't hate -- I'm from Texas and it's fabulous), Lynnie gave me a bacon cookbook one time that included desserts with bacon in them. In short: bacon, bacon, bacon. As often as possible, as much as possible -- bacon.

Maybe a year ago, a bunch of us were at Lynnie's house (I can't remember why now), and she had some precooked bacon. It was curious -- there were these sort of slabs of bacon that had been cooked, separated by layers of wax paper and then packaged. All you had to do was pop it into the microwave to warm it up, and tah-dah -- bacon.

I am not sure why I didn't immediately recognize the genius of this whole concept -- it could have been the migraine meds I was on at the time dampening my enthusiasm. We'll blame that. But really -- the whole deal with bacon (aside from arteriosclerosis) is that it's a huge pain to cook. It produces a ton of grease (which you then have to dispose of somehow since no one uses bacon grease to cook with anymore) which spatters all over the place, and you have to keep turning it and turning it. Plus it's also really easy to over- or under-cook and burn yourself in the process.

All those problems evaporate with precooked bacon. You open the package, plunk however many slices you want between a couple of paper towels, stick it in the microwave for less than 30 seconds, and bam! -- bacon, y'all. I think I am on my third package of the stuff in three weeks, and was greatly relieved to see that there was a store-brand version of this at my local Safeway. It's nice to be able to meet my need for bacon and economize at the same time.

For better or worse, I am eating a lot more bacon these days, thanks to the precooked stuff. I cannot recommend it highly enough.
at 6:56 PM

I am particularly fond of the Jimmy Dean version. Raley's puts it on sale on a farily regular basis. I stock up and keep it in the freezer until I am ready to use. :)

By the way, love the verse from Hosea. Missed you this morning.

thanks for the tips, ladies. I think this could greatly streamline my am kitchen time! How much more expensive is it?

Sharon --There is a good difference, but I justify it to myself by telling myself that I'm paying for cooked weight instead of raw weight... or something like that. ;) But then again, I tend to use bacon as an accessory to meals (mainly sandwiches or crumbled on pizza) and don't use it TOO often...