Why I'll be boycotting the NFL this season 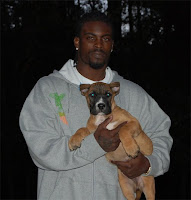 Felonious dogfighting entrepreneur and former quarterback Michael Vick was conditionally reinstated in the NFL yesterday by the league's commissioner. I'll be taking my viewing time elsewhere this fall. From espn.com:

NEW YORK -- Michael Vick is back in the NFL. Now all he needs is a team to play for.

Vick, free after serving 18 months in prison for running a dogfighting ring, was reinstated with conditions by NFL commissioner Roger Goodell on Monday.

Vick can immediately take part in preseason practices, workouts and meetings and can play in the final two preseason games -- if he can find a team that will sign him. A number of teams have already said they would not.

Sal Paolantonio says the wording for Michael Vick's return gives the commissioner a lot of latitude on when to fully reinstate him. How many teams are interested?

Once the season begins, Vick may participate in all team activities except games, and Goodell said he would consider Vick for full reinstatement by Week 6 (Oct. 18-19) at the latest.

According to ESPN's Sal Paolantonio, a source close to Vick expressed "shock" over the severity of Vick's punishment and said Vick will reapply for full reinstatement as early as Week 1.

Goodell suspended Vick indefinitely in August 2007 after the former Atlanta Falcons quarterback admitted bankrolling a dogfighting operation on his property in Virginia. At the time, Goodell said Vick must show remorse before he would consider reinstating him.

"I accept that you are sincere when you say that you want to, and will, turn your life around, and that you intend to be a positive role model for others," Goodell said in his letter to Vick. "I am prepared to offer you that opportunity. Whether you succeed is entirely in your hands.

"Needless to say, your margin for error is extremely limited," the letter said. "I urge you to take full advantage of the resources available to support you and to dedicate yourself to rebuilding your life and your career. If you do this, the NFL will support you."

Goodell said he spoke to numerous current and former players and coaches as he weighed his decision and that the responses were "very mixed."

Labels: If he goes to the Vikings I will be very sad

I agree he's a thug and a despicable human being, but boycott the whole NFL season?

You're o.k. with the pro-athletes who are vulgar womanizers?