So I got a flu shot yesterday and since last night have had a 103-plus-degree fever. Hurray! Ibuprofen had no effect. I feel less strange (and less feverish) now than I did earlier today; hence, a post!

New haircut
Here it is from last night just after I got home from the salon and as I was starting to shiver inexplicably. 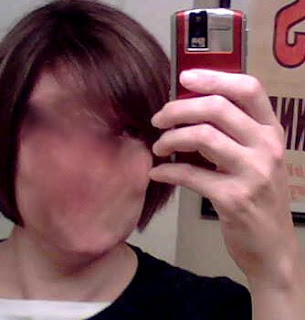 Excuse the blurred-out face. It's (and I'm) especially badly photographed on the CrackBerryCam. I like it, though. It's short! 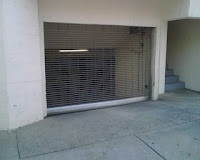 The Pee Bandit
So last week I got a call at work. It was from the maintenance manager of the apartment building where I park my car during the workday (I have a CADA-rented space). He had gotten my number from CADA and had some questions about what "activities" I might have witnessed in the garage.

At first I thought he was implying that I had done something wrong, like clipped a car pulling in or out of the narrow little lot or somehow otherwise done something to another car. But finally he came out with it -- apparently, a guy who parks immediately across from me in the garage has been suspected of some seriously weird behavior; namely, the maintenance guy thinks he's been putting urine (yes, you read that right) in the building's air ducts and throughout the garage itself.

Had I smelled anything suspicious, he asked, or seen the guy lurking around? Um, no, I hadn't. This disappointed him. He then went on to tell me The Pee Bandit's age, marital status and other sundry details (which made me wonder how much he knows about me...). The building is weighing the installation of security cameras over the whole thing, and apparently the guy also owns a lot of guns but, he said, the Sacramento Police can't do anything about the gun/pee banditry situation until someone gets hurt.

If there are further developments involving pee in my garage, you'll read them here first.

Reading
I've begun the Left Behind series. It's .... intense. For those of you who haven't heard of this, it's a series of books that begins with the Rapture, when Christians suddenly, bodily leave the earth to be with Christ in heaven. Different eschatologies interpret the Bible differently in terms of the end times and what may happen, but the Left Behind series' fictional portrayal of one set of scenarios is compelling.

I don't recommend reading these books and watching Tivoed My Own Worst Enemy episodes immediately before bed. The subsequent dreams are strange and troubling.
at 4:37 PM

Labels: In one dream I was a spy with multiple personality disorder for the Tribulation Force

Cute hair! Sorry about the sick. :(

Pee Bandit: "the Sacramento Police can't do anything about the gun/pee banditry situation until someone gets hurt" — or until he actually commits a crime which, I think we can all agree, is as it should be.

My question, though, is why can't the proprietor of the garage just boot the guy? Shouldn't his businesses have a 'we reserve the right to refuse service to anyone' policy?

Thanks for the hair compliments!

Rodney, the guy lives in the building where my parking space is located, which is a CADA building. I think the crime they're hoping to catch him at is vandalism, given the pee spree.

In that case I hope they're not actually waiting til someone gets hurt and just waiting til they have enough evidence to charge him. Which, I guess, is what I should have said before.