Finding something you didn't know was lost

My mom and I had a, shall we say, challenging relationship. We were very different kinds of people in the first place, which didn't help matters, and while we had some degree of love for each other, I don't think either of us liked the other a great deal. Then there was the brutal childhood and string of stepfathers. I wound up leaving home at 18, finding my way to Alaska through a series of misadventures (pretty much as far away from her as I could be from her and not need a work visa) and winding up in California, where I married and basically built my life as much without her as I could.

But I was an only child. So try as I might to stretch the bonds between us to near the breaking point, and I went years at one point without speaking to her, we eventually settled into a somewhat brittle relationship just as I was finishing college. Recently separated, I was more open to some sort of family, even if it wasn't exactly ideal. And she had made some changes in her life that made this a safer thing to try out.

Just about two years later she was diagnosed with advanced ovarian cancer, which she fought tooth and nail. I went home every 28 days to be with her for the weekend following every chemo treatment, and those years are a literal blur. Somehow having a pretty demanding job at the Capitol here, shuttling back and forth, managing doctors and caregivers and, eventually, hospice from afar. She died in 2001; I packed up her house (with lots of help), moved most of it to California and basically carried on.

I kept a lot of her books; I love books myself, maybe more than she did even, and though the majority of them weren't things I'd choose to read personally, it seemed like a way of keeping a piece of her close. They have been stacked in a spare bedroom in my house, mixed up with books of my own, waiting for me to find the gumption to organize them properly.

Cut to this week, when I found myself ferreting around up there for a particular book. When instead I found this. 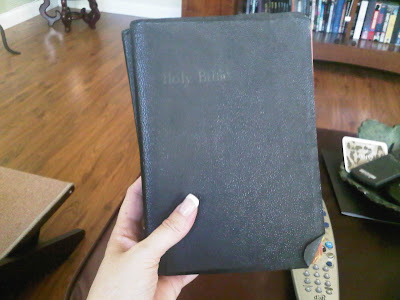 A very old Bible. Weird that I hadn't noticed it before, but I figured it was my grandmother's, since she'd attended church. I looked inside. 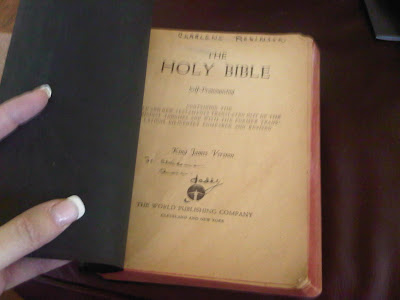 It had my mother's maiden name in it. Weirder still. Then, the clincher... 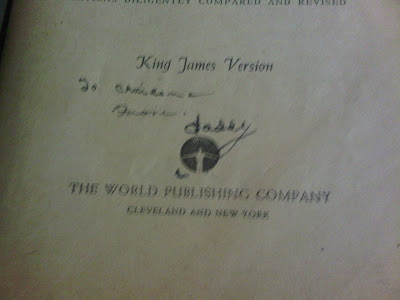 It had been given to her by her father. Who died when she I was think 7 or 8.

As someone who felt so separate and apart from her mother even in the closest of moments, this remembrance of her as a little girl, as some one's daughter, bowled me over. A snapshot of her from a time when she was small enough to call her father Daddy and before all badness and craziness and disease. And now that I am a Christian, that we share some connection -- however fleeting, however small -- to the same text.

I keep turning the book over in my hands, wanting to sort of get familiar with it. Its pages are yellowed and its binding weakened, so I have to be really careful, but I've officially moved it out of the piles of books to be sorted some day and down to the family room, where I can see it every day. 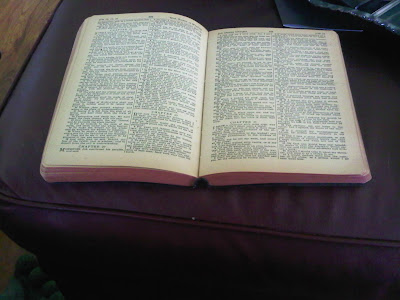 This is really cool. Was your grandpa a member of a church somewhere? Any notes or highlighted verses in the Bible?

Maybe a glimpse into God's hand of providence working in your life before you were born (but He knew you). *goosebumps*