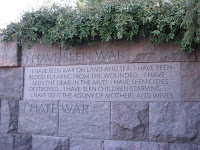 These days I'm reading No Ordinary Time, an amazing book by the way, and as I've read about the days leading up to World War II,  President Franklin Roosevelt's faith in the American people has been striking -- faith in their ability to meet challenges, to overcome want and to strive despite overwhelming circumstances to make the world safer, fairer and more open.

But he knew that none of that came without a price. That however much isolation from Europe's tyrants we were afforded by ocean borders, as long as we stood for something that flew in the face of subjugation and cruelty, eventually we would have to join the fight.

FDR had no illusions about war's horrors, price and reality. And to whom it would fall to bear their brunt. With the Great War still sharp in Americans' memories and Nazis sweeping through Europe, he committed the country's military materiel (such as it was at the time, given protectionist world views), factory production, and eventually its young men (my father among them) to the second world war in a generation.

Sounds great. Can I borrow it when you're done?